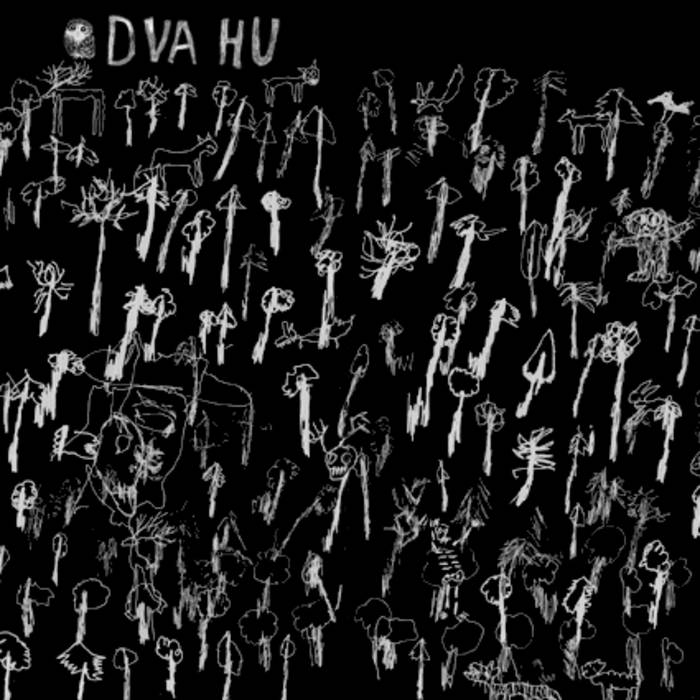 Sasha Yeusiuchenia Thank you for this album. It really makes my inner child peaceful and cherished Favorite track: Hap Hej.

Vez There's something magical in this music, something strange, but beautiful and adorable. I find it perfect to listen to at night, right before going to bed, it gives me the nicest dreams... Favorite track: Huhu.

The third album of the duo Dva bears the name of HU (short for Hungary, or fifth most common surname in the world, an ancient Egyptian first word for “god” or a kind of goat). But in their language, for Dva it also means the first syllable pronounced by a human being as well as the sound of monkeys and owls. After the previous concept of folklore of non-existing nations with which they worked on the album Fonók (2008, Indies Scope), Dva come with the concept of pop of non-existing radios. For collaboration on this album they again chose the Berlin producer Jayrope.

There has been almost two years between Hu and Fonók recordings. And really busy two years. Besides the extremely busy touring schedule (more than 150 concerts all around the world) Dva worked on music for theater performances. DVA’s music was chosen by Deutsche Telekom for their advertising campaign for the German market. The album Fonók was keenly appreciated by critics, significantly succeeded in WMCE Europe, was nominated for the prize Anděl 2008, ranked fourth as the best Czech-Slovak album of the past decade according to the editors of Musicserver. “Originally, we wanted to be the happiest album of all times,” say DVA. “But in the end, everything changed a bit and somehow couple of melancholic moments snack in. Now those songs are rather happy melancholic pop-songs.”

HU originated in July 2010 in a cottage called “At the Devil’s” in the almost abandoned Padouchov village. “On this album, there are thirteen songs written in non-existent world languages, listened to on thirteen non-existent radio stations”. After the album Fonók, which lyrics were mostly about cold northern regions, the album Hu is dedicated to animal motifs and tropical and southern countries.

In the attic home studio where DVA recorded also the album Fonók the recording equipment is very simple and effective: radio mixer Studer once set aside by the Radio Free Europe, AKG microphones from 1948 and this time the very necessary voice recorder. The band again comes with original and elaborate song forms full of singing in its own language. Compared to Fonók there is much more sampling here this time. Of course, DVA only draw inspiration from their own resources – they use and arrange parts of their own field recordings which they often place in an unexpected context or change beyond recognition. The fundamental creative impulse for the creation of many songs on this album was Dva’s this year’s tour on the tropical island of Reunion. “We wanted most of the songs to be created here. Every day, just to take the banjo and record the entire album acoustically on voice recorder. In the end, we couldn’t bring the banjo on the plane. Most of the songs were created in May in Pardubice (Czech republic)." The band tried to transfer their strong experience from Reunion into the songs - thanks to that, the album radiates almost tropical atmosphere. You can hear here monkeys’ bray and sounds samples from the streets of St. Joseph in Reunion as well.

Consequently when recording the album the duo turned into hunters of “disturbing” sounds in intervals between studio work; the recorded sounds from an open window or in local woods. That’s why you can hear sounds of flying planes, mooing cows, a bumble bee or a neighbor – beekeeper who plays a 150 years old trumpet. In the arrangements the band also used sounds of cottage equipment, such as cans, bottles or old dishes. Honza Kratochvíl again praises the cooperation with Berlin producer Jayrope. “He liked the new songs so much that many things from our original material remained; stuff that we considered provisional. But what we really liked was what he brought into those songs in Padouchov. So, after Fonók, there is another proof that we have really understood each other perfectly.”

The experienced radio technician Josef Švarc (Bára Švarcová’s father) has assisted the recording the entire time. The final mix and mastering took place in the studio of Vitaliano Zurlo in Berlin; once again on the analogue tape. The album, using old technology and Jayrope producer skills, retains a homely atmosphere.

Bandcamp Daily  your guide to the world of Bandcamp

Cannibal Corpse's George "Corpsegrinder" Fisher stops by for an interview